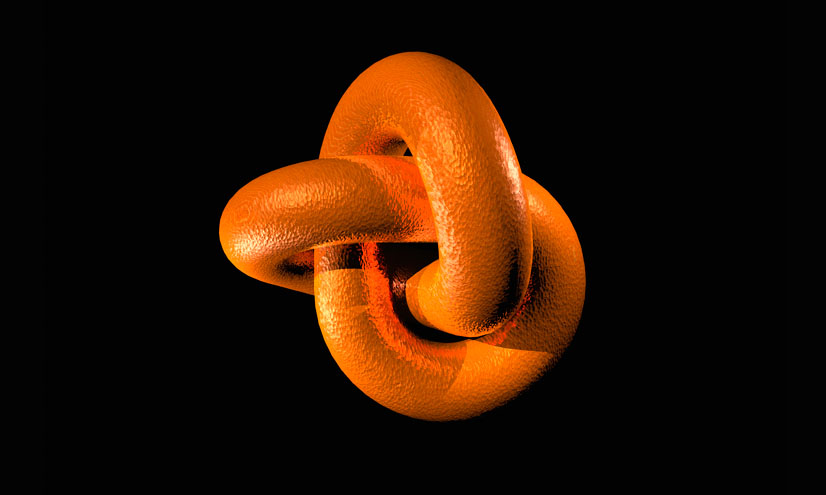 How objects can be deformed to make different shapes without tearing, cutting or gluing.

If you were to draw something on a sheet of rubber, stretching the rubber would change its shape.

But is this still the same object, or have we created a new one?

There is a field of mathematics which studies what is preserved and what is changed as a result of these kinds of distortion.

Informally dubbed 'bendy geometry', topology explores the way one object can be transformed into another, by bending, stretching and squeezing, but not cutting or tearing.

However, a bagel cannot be created from a football, you would have to cut a hole out of the ball.

Objects that can, in theory, be morphed into each other are said to be homeomorphic.

Homeomorphic:
Objects can be transformed into each other

In contrast to Euclidian geometry, which deals with the study of angles, surfaces and edges of objects, topology focuses on the relative position and continuity of objects.

As an example, the Möbius band has only one edge and one surface.

In terms of Euclidian geometry, the lack of varied angles, surfaces and edges means there is not much to study.

But in topology, the unique shape and continuity of the strip are of more significance.

Topology is not merely a field of abstract study.

In fact, many diagrams are altered using topology to make them easier to understand without materially changing the content.

Topology is used all over the world to create subway maps, where the distances between the stops are shown as being equal, without bends in the tracks.

This creates a simpler and more effective map, morphing the trains' trajectories without changing the order of the stops or connected stations.

If the length of the tracks were represented more accurately, these maps would be much harder to decipher!