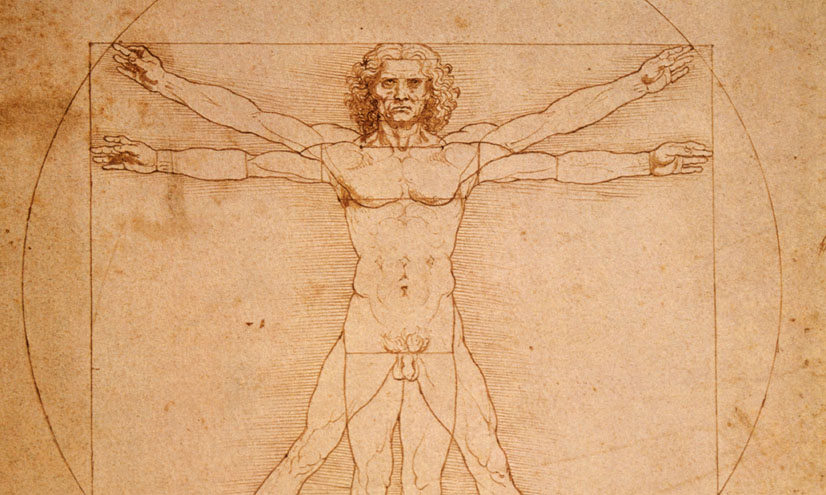 What role does geometry play in da Vinci's famous drawing, and how does it use proportion to describe human anatomy and 'design' in nature.

This renowned drawing shows that geometry has been used for centuries to reveal the secrets of natural design.

Using the simple geometric shapes of a circle and a square, and the concept of proportion, it draws on the work of a Roman writer, Vitruvius.

Vitruvius was fascinated by architecture, and wrote that buildings should be designed on the same principles as nature's most perfect form.

But visualising the perfect human form described in Vitruvius' work, was tricky.

It took the genius of Leonardo da Vinci to unlock the puzzle, in his version of the Vitruvian Man.

For example, Vitruvius stated that a man's palm is the width of four fingers.

From chin to crown, the head is one eighth of his height.

And his height is 24 palms.

This ratio helped inform Da Vinci's diagram of human anatomy through the visualisation of a perfectly proportioned man.

Da Vinci's illustration of Vitruvius' idea also placed his figure within two geometric shapes – a square and a circle.

But he bettered previous attempts by moving the centre of the two shapes apart.

This harmonised man with geometry, creating a symmetrical figure.

Da Vinci was also unique in posing his figure twice – cross-shaped in the square, outstretched in the circle.

Like Vitruvius, da Vinci thought that the 'design' of the human body should inspire human works.

Indeed, Vitruvius' geometric principles inspired architects throughout the Renaissance period and beyond.

Church of the Redeemer
Venice, Italy